Make a selection to be directed to a strategy that meets your needs.

For all the Fed’s insistence that it acts independently of the executive branch, recent history would suggest that President Trump will pull enough geopolitical strings to make an already dovish Fed more amenable to lowering rates with just enough lead time to boost the economy heading into the 2020 Presidential election cycle.

The Fed’s pivot toward patience was one thing following a near 20% decline in the S&P 500® in 4Q19. More recently, after a steady stream of critical tweets and pronouncements from the White House, Fed Chair Jay Powell signaled a willingness to lower rates if trade tensions with China and Mexico slow the economy further.

Now that tariffs against Mexico have been suspended, one has to wonder how in sync Fed Chair Powell is with FOMC Vice Chair John Williams and Fed Vice Chair Richard Clarida, as the latter pair have more dovish leanings and may be further along in their desire to make policy more accommodative.  Chair Powell has offered a slightly more conciliatory tone of late, but he may want to see additional data before agreeing to lower rates.

In any case, the stock market has once again become the proverbial tail wagging the economic dog. Whereas the Efficient Market Hypothesis (EMH) would have us believe the stock market is a discounting mechanism that factors in all available information and present and potential future events, we believe the stock market has become a discounting mechanism for Fed policy, given the Fed’s reflexive responses to massive sell-offs and escalating trade tensions. Call it the Fed’s third mandate, as policy seems fixated on ever rising asset values.

The FOMC meeting and consequent press conference on June 19th clearly illustrate the central bank’s unwillingness to push back against market expectations/demands. The bond market already priced in additional monetary accommodation and risk markets were already rallying in anticipation of an FOMC affirmation, leaving Chair Powell and the FOMC to either ratify the market pricing with a signal of looser policy to come or disappoint and dare to incite a “risk-off” move. Rationalized as a response to offset heightened uncertainty and lower global growth, the FOMC laid bare its dovish bias. Risk markets rallied as the FOMC articulated their “dovishness” in the context of acting to sustain the economic expansion. But when Chair Powell was specifically asked how a lower Fed target rate actually transmits to less uncertainty, more corporate investment and ultimately better economic outcomes, the response leaves investors to wonder.

Strong/Persistent Structural Headwinds
Consider the structural forces that have remained in place since the global financial crisis. Excessive debt has only continued to grow throughout the recovery. Global debt went from $173 trillion at the end of 2008 to $243 trillion at the end of 2018 (according to the Institute of International Finance). An aging global population will increasingly have significant implications for the labor and financial markets, and the demand for goods and services. (Exhibit 1) The global manufacturing complex is faced with huge excess capacity, as overly accommodative monetary policy has allowed many “zombie” companies to stay in business, instead of the more traditional business cycle expulsion of the weak and over-leveraged companies the last cycle created. As a result, manufacturing output has jumped 75 percent since 2007 to $35 trillion (See Exhibit 2), amidst the slowest post-war recovery on record. And longer-term productivity trends have slowed since the 1990s. In fact, more of the technological advances that have grown prominently over the last decade may have enabled our work force to actually be less productive, given the popularity and ubiquity of personal devices and social media platforms. 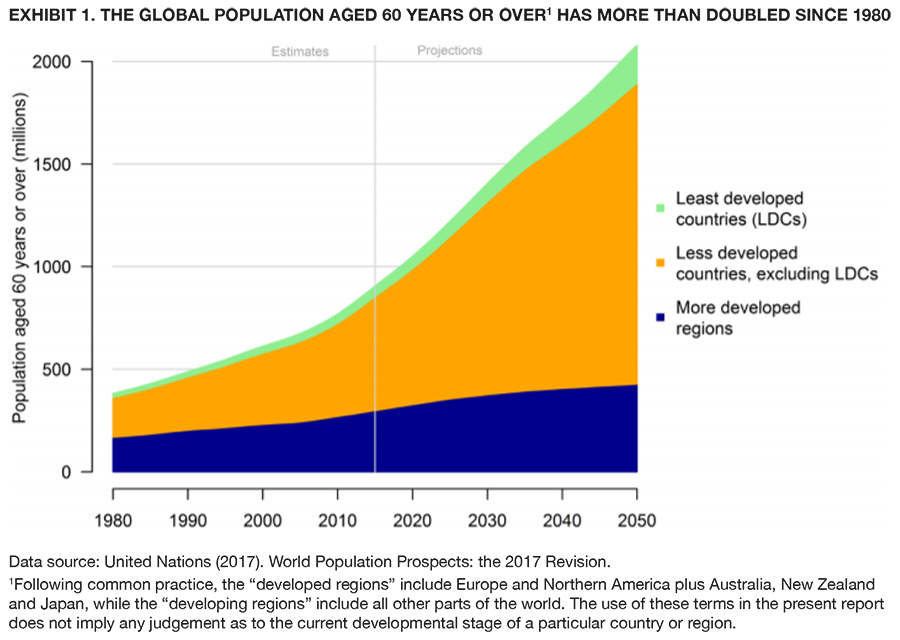 Slowdown Ahead
The aforementioned structural headwinds are the primary reasons potential growth currently resides below 2% by most economists’ estimates, including the Federal Reserve. The fiscal stimulus-induced growth spurt of 2018 was transitory, and recent data trends point to a return to this post-global financial crisis growth trend as the Tax Cuts and Jobs Act of 2017 stimulus wanes. Per Citigroup’s soft and hard economic data change series1, trends have been in decline, and 2019 has seen a precipitous decline in the soft data change series. This series is more survey based and has the tendency to turn earlier than the hard data change series (Exhibit 3). Convergence of these series in the direction of the soft data change trend will not be welcome news to the risk markets.

The New York Fed’s recession probability model is also beginning to signal the onset of a more challenging economic environment, with the probability of recession approaching 30% over the next 12 months (Exhibit 4). The model in more recent cycles has shown that levels just above 40% have occurred immediately prior to the last two recessions. Shaded areas on the exhibit correspond to recessions.

The Treasury market rally of the last six weeks is also implying more challenging macroeconomic outcomes and consequently pricing in a ~53% probability of a recession in that same time span, according to JPMorgan strategists. Meanwhile, the equity and high yield markets are pricing in much lower recession probabilities (~17% and 1% respectively).

If the scenario implied by the recent Treasury rally plays out, the 10-year Treasury could drop below 1% and the 30-year could drop below 2%. And a not insignificant portion of the BBB corporate bond market is vulnerable to losing its investment grade status in the next recession, thereby putting additional pressure on the high yield market’s ability to absorb an unprecedented amount of fallen angel risk.

Climbing the Wall of China Worry
The ongoing conflict with China most likely will intensify and represents much more than a trade war. This has all the hallmarks of a looming economic cold war that could last years as China transitions from customer (multinational companies) to competitor in an effort to move up the technology value chain and challenge the superpower status of the United States.

China’s “Made in China 2025” industrial policy aims to rapidly expand its high-tech sectors and develop its advanced manufacturing base through a combination of government subsidies, state-owned enterprises, and further acquisition of intellectual property beyond what Western companies have already contributed (or lost) to Chinese joint ventures.

Of course, China will continue to need U.S. dollars to fund its commodities purchases, growth aspirations and to compete in global markets, and for that reason, the chances of China dumping Treasuries as a retaliatory measure seem minimal, in our view.

However, should the trade war continue, China will attempt to leverage its dominant position in the global market for so-called rare earths. These are minerals that are critical to the United States’ industrial-military base, including smartphones, aircraft, computers, and GPS navigation systems, as well as green technologies such as wind turbines, energy efficient lighting, and hybrid vehicle batteries. While China was responsible for more than two-thirds of global production as of 12/31/2018 (U.S. Geological Survey), China is estimated to control 38% of known reserves of rare earths. It is therefore likely that as the trade/economic cold war evolves countries like the United States will diversify their purchases of rare earth minerals so as not to have to be dependent on China going forward.

For investment grade investors, U.S. Treasuries should remain attractive, but a defensive posture as it relates to security selection within corporate sectors will be critical as the global slowdown morphs into a global recession.

S&P 500® Index is a free-float market capitalization-weighted index of 500 of the largest U.S. companies. The index is calculated on a total return basis with dividends reinvested. The index is unmanaged, and its returns do not reflect any fees, expenses, or sales charges, and it is not available for direct investment.

1 Citi Economic Data Change Indices measure data releases relative to their 1-year history. A positive reading means that data releases have been stronger than their 1-year average, and a negative reading means that data releases have been worse than their 1-year average. Economic data essentially falls into two camps: hard data, such as that from government statistical agencies used in constructing real gross domestic product (GDP), and soft data, such as business, consumer confidence and sentiment surveys, financial market variables, and labor statistics.